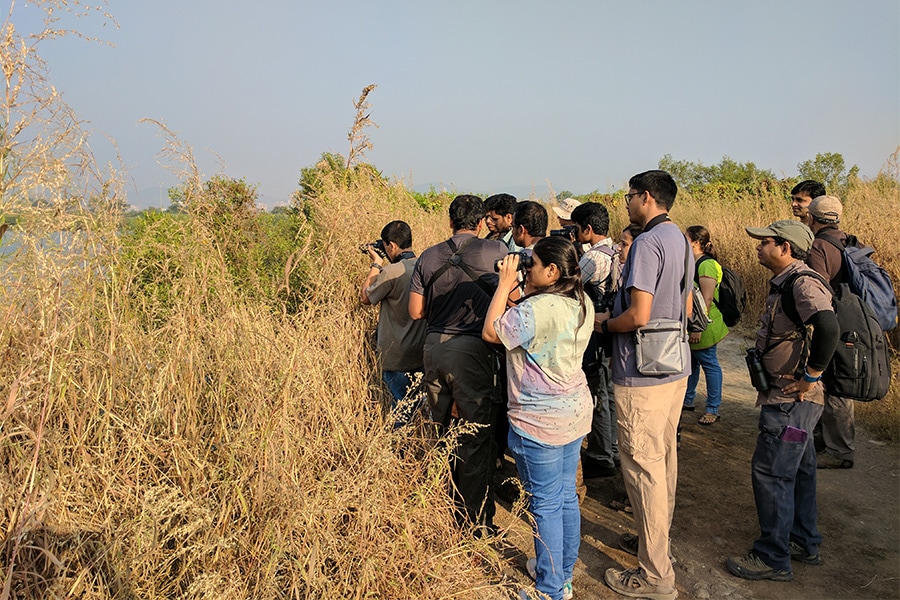 It was during an eBird monitoring workshop conducted at the Mahim Nature Park in September that I first heard whispers. The Mumbai Birdwatchers’ Club (MBC) was being revived. Having only started birding in the last couple of years, I was not even aware such a platform had even existed. There were of course communities of birders spread out over the expanse of Mumbai, Thane, Vasai, Dombivli and Navi Mumbai out almost every weekend (if not during the weekdays too), but an initiative that would seek to unite all of us that followed these winged beauties throughout the year (Yep, even during the monsoon) made for an exciting prospect. Like any other social activity, birdwatching is also best enjoyed in a group, like-minded people using the combined power of their observation skills to maximize sightings of both species and interesting behavior and also sharing their collective knowledge gained by experience. An initiative aimed at aiding conservation of habitats under increasing human pressure, no fees would be charged for any of the walks, the purpose being to build a community of bird lovers who could consistently document avifauna by putting their checklists on sites such as eBird along with photographs.

So, it was great to finally hear of the first birdwalk being planned on the 30th of October, a Sunday at one of Mumbai’s most popular birding hotspots, Bhandup Pumping Station (BPS). The area is part of and synonymous with the recently established ‘Thane Creek Flamingo Sanctuary’ declared in August last year which itself is spread out over 1,690 hectares. It has been recognized as an Important Bird Area (IBA) by the Bombay Natural History Society, an initiative by Birdlife International to identify global avian diversity hotspots.  As its name suggests, BPS like its south Mumbai counterpart, Sewri serves as a congregation point for the famous flamingoes, including both the Greater and Lesser flamingoes. They can actually be sighted throughout the year, but the highest numbers are typically seen from November onwards going into the summer months. In addition to the flamingoes, BPS also supports an incredible avian diversity with more than 200 species reported from the area, including rarities for the Mumbai region such as the Pallid Scops Owl and Grasshopper Warbler.

The co-ordinators for the first birdwalk were Saurabh Sawant, Amey Ketkar and Rujuta Phadke, all respected senior birdwatchers that have spent many years documenting avifauna all over Mumbai, and over the rest of the country as well. We were meeting at 7:00 am, and I had decided to drive there, so I picked up fellow birders, Vikrant Chaurasiya and Yogesh Patel as well as Saurabh as we headed to the meeting point just near the entry point to BPS close to Airoli bridge near the salt pans. 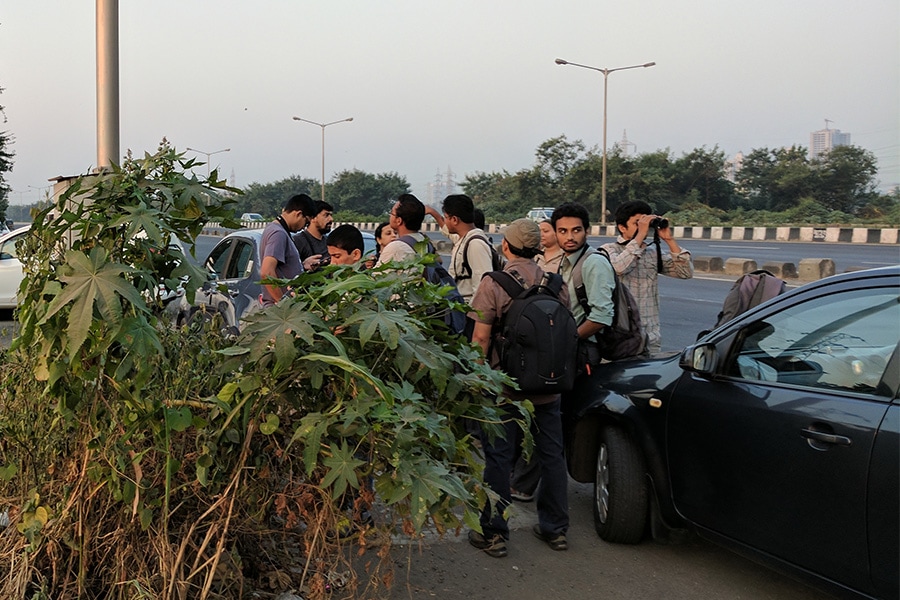 While mail registrations had been sought, there were still a good deal of informal confirmations of arrival so it was unclear what the participation was going to be like. We reached the spot, meeting Amey and Rujuta as well at 6:45 AM, while waiting for others. By 7, a total of 25 people had gathered together, an ideal size that Saurabh, Amey and Rujuta were looking at for the group.

We then decided to make our way in. Finally, all of us reached the designated spot in BPS which is a tarred road with the Pumping Station on the right and the creek on the left. We also met with another senior birdwatcher who had already reached the spot, Mayuresh Khatavkar who was already actively birding pointing us to a large congregation of blue-cheeked and blue-tailed bee-eaters.

Without as much as a second thought, everyone had their binoculars and cameras out, and the avian treasures of BPS revealed themselves. A Yellow-eyed babbler skulking in the long grass, Baya weaver flocks foraging away along with Red Avadavats as well. Interestingly, hidden in the long grass, we spotted some migratory buntings as well. We got a second look at them later in the day too, however from the angles visible, were unable to see the characters favouring a particular species, photographs were taken, and it was best narrowed down to an immature red-headed/black-headed bunting.

Amey had brought along the scope as well, so we made our way along the dirt trail taking us further inside the creek. We could spot grey-throated martins (plain martins) flying overhead. Gradually, as we went closer, we could see huge flocks of waterfowl (ducks among which northern pintails seemed to be the most numerous), egrets, gulls, terns and black-winged stilts on our right. The air was abuzz with the calls of warblers as well.  Amey put up the scope and one by one, we had close looks at different species such as the slender-billed gull, grey heron, little grebe among others. There was also some activity further up ahead. Some of our fellow birders could see warblers. Saurabh was with the group, and to everyone’s delight, they were treated to close views of both the paddyfield and Blyth’s reed warbler. It was a great opportunity to compare the characters that separated the two species.

As we made our way back, on the opposite side which were dotted with mangroves, the group spotted more new species for their list on the day. A common snipe was feeding sheltered in the mangroves, and three different species of sandpiper, common, wood and green sandpipers were also seen. Once again, Amey, Saurabh and Rujuta guided the group on the different characters that separated each species, from the prominent supercilium (eyebrow) of the wood sandpiper to the white shoulder patch of the common sandpiper.

We made our way back on the tar road and decided to explore the road up till the end. White-eared bulbuls were almost continuously seen every few metres. A spotted dove stood watch perched in the high branches. And then the delight of most birders was seen, the Indian Paradise Flycatcher. Almost everyone caught a glimpse of the bird, though photographing it was a challenge as it moved in the canopy. As we headed further, we also spotted a house crow mobbing a western marsh harrier.

It had already been an incredibly rewarding walk, when I got a call from Vikrant at around 9:15 AM. Two more our company, Varun Satose and Aditya Akerkar were planning to head to Uran to catch a sight of the Caspian Plover, a very rare migrant which has only a few records from India, and had the birding circuit abuzz during the week. I had already been planning a visit, and I latched on to the opportunity as Vikrant had been to the spot the previous day. I took leave of the group, and we were also joined by another enthusiastic birder, Arun Varghese.

Long story short, we reached Uran by 10:30 AM and began our search for this elusive plover which has only a few records from India. It had been seen in the dried lake bed at Panje village. We soon came across the first of plovers, which were little ringed plovers in varying states of plumage. Further on, we saw Kentish plovers as well. Vikrant had seen the Caspian plover very close to the road the previous day, and the plover didn’t seem to be in the same area today. We went further in, and were also joined by some birders from our birdwalk including Mohak Katvi, Vinod Verma and Prathamesh Desai. On their arrival, we were rewarded by an osprey flying high up in the skies. As we went further in search of the plover, Prathamesh spotted larks as well which turned out to be Sykes’s short-toed larks.

Unfortunately, despite our efforts, it seemed the plover had moved off. We were just on our way back, when Mohak got a call. His face immediately brightened, and I hoped for news of the plover. Mohak informed us it was not news of the plover but just about 100 metres from our present location, his friends Chirag and Nayana had  seen another coveted migrant. This endangered species was usually best seen in freshwater habitats with sandbanks, primarily in Madhya Pradesh. But even last year, one individual had made its way to Uran for a few days. We could not believe our luck! It would be a lifer for all of us. Which bird this was? Read on 🙂

Since we had missed on the plover, I decided to err on the side of the caution and didn’t get my hopes up high. We made our way to the location pointed out by Chirag and Nayana and soon spotted a huge flock of terns resting in the centre of a freshwater body about 70 feet away. We spotted Caspian terns, along with some smaller terns as well and not seeing the bird we expected to, again became concerned. Then, Mohak got an image on his phone from Chirag and we narrowed down the location based on the landmarks in the image.

And then, we see something. Varun and I were closest to the spot, and almost simultaneously we spotted the much darker head and body. And then it turned. And there it was, in all its glory, the Indian Skimmer.

We took a few record shots and saw the bird in our binoculars to our heart’s content, delighted that our trip had in fact resulted in a rare sighting, even if it was not for the one we had intended. Being in a community of people who share the same passion could often result in unexpected rewards like these. My rendezvous with this Indian skimmer would never have been possible had I not joined the BPS birdwalk in the first place.

As we shared the good news with some of our friends at BPS, Saurabh also informed us of the amazing morning they had there. A total of 83 species had been spotted, and the group was treated to some amazing activity by Eurasian wrynecks!

How to get there

Bhandup Pumping Station is accessed close to the intersection of the Eastern Express Highway and the Mulund Airoli road. If coming from Mumbai’s suburbs, one needs to take a u-turn under the Mulund flyover and then take a left. You will see salt pans on your left.

Once you enter the road, keep following it until you reach the gate at the end manned by the forest department. Just before it, is a dirt track on your left. The condition of this road is questionable at best for the next 200-300 metres, and it is recommended to have a vehicle in good condition with high ground clearance, ideally an SUV before you once again hit the tar road further up ahead (Alternatively park your vehicle before the kachcha road). Birding is rewarding all along this road, and there is a trail opposite the pumping station which takes you further within the creek offering better viewing opportunities especially for waders and waterfowl. Close to high tide is the best time for viewing waders, but since there is a good mix of woodland and grassland habitat as well, even early mornings regardless of tide timings can be quite rewarding.

This work is licensed under a Creative Commons Attribution-NonCommercial 4.0 International License.