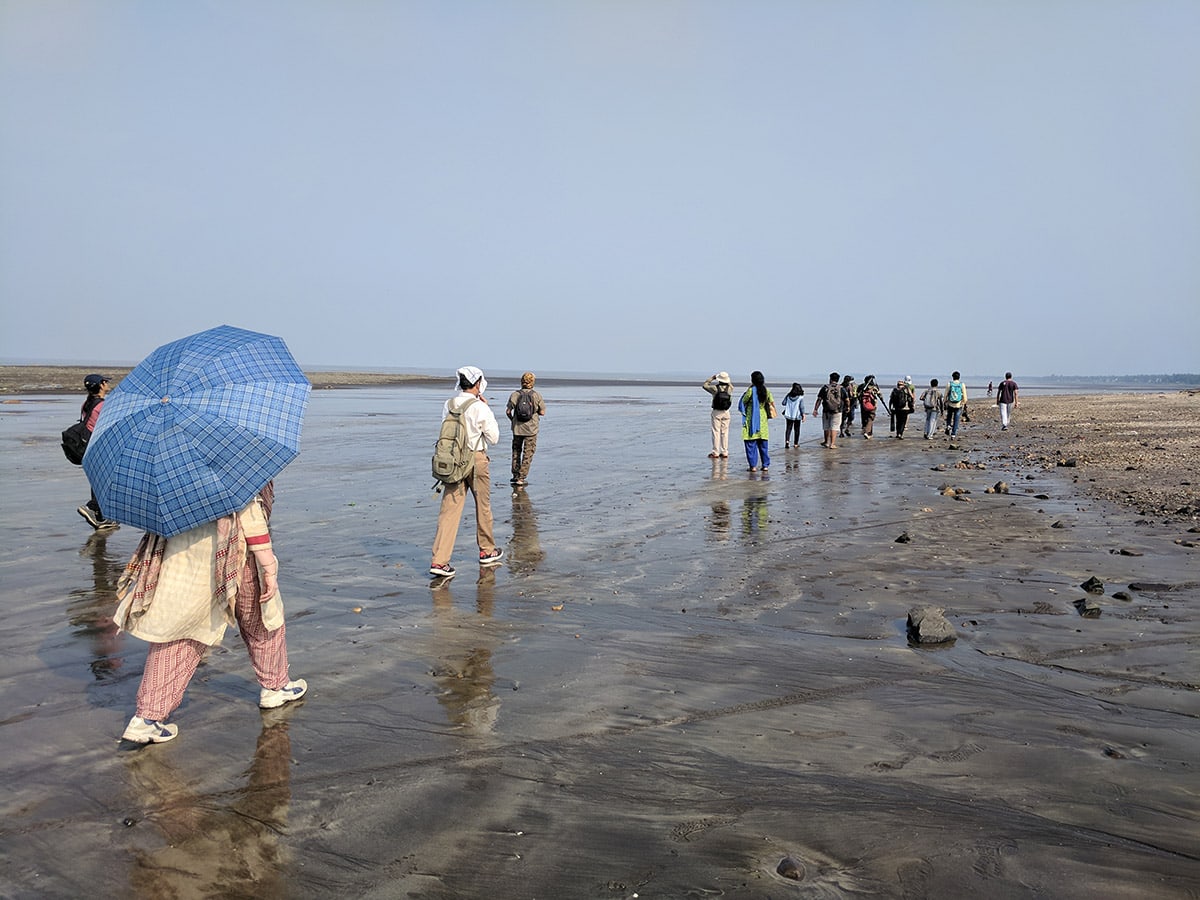 Birders just need an excuse to start birdwatching. Even with the first birdwalk of the season starting at the all-time favorite, Bhandup Pumping Station (part of the Thane Creek Flamingo Sanctuary) where we were sizzled to a crisp with the heat and humidity such that pakoras (fried dumplings) become the popular term to refer to each other, the spirits never once dampened (even with all the sweat!) and there was plenty of demand for the next walk. It was ‘passage migrant’ season after all (Passage migrants to a particular area are typically birds that do not linger around very long, spending a few days to perhaps a month before heading to their wintering or breeding grounds where they spend a longer duration of time probably spanning a few months. For Mumbai and surrounds, typically just before and after winter tend to be suitable conditions for seeing passage migrants to the region).

We discussed and debated locations, and hearing of good sightings from Vasai and thanks to the availability of our coordinators from there, our next location was finalized, Bhuigaon beach. This location is considered to be one of the best birding spots in the Vasai region because apart from the relatively undisturbed beach that attracts waders and other shorebirds, there is a good mix of woodland, grassland and marshy habitats that you would also pass through before accessing the beach that also offer interesting sightings such as buttonquails and crakes. How this mix of habitats would impact birding I’ll explain ahead.

I was scheduled to also assist in coordinating the walk along with Kuldeep Chaudhari, Mandar Khadilkar and Varun Satose but some coughing and sneezing a few days before the walk had me watchful of committing to any travel. Luckily, just a day before, the irritating sniffling had gone, and I was all set to join for the walk. So before the crack of dawn, I was up at 4:30 AM, to catch the 5:12 AM train from Andheri to Nallasopara station, a journey of about 45 minutes. At Nallasopara, I met more birders, Ronit, Arun and Mohit who were joining us. From there we took the bus to meet everyone else at the Bhuigaon Church bus stop from where we would all proceed for the walk.

Once we got down from the bus and before the other participants arrived, we walked up ahead a bit and could hear the lilting ‘Tu-hee, Tu-hee’ call that announced the arrival of a local migrant, the Grey-bellied Cuckoo. The call was being heard within the township itself, and moments later, Ronit spotted it and just a seconds later, we saw the bird take flight to disappear amongst the buildings. Participants began to come in by that time along with Mandar, Kuldeep and Varun. There were over 40 participants by the time everyone came so as was the usual practice, we split up into groups, each of the coordinators along with a few experienced birders leading and interpreting sightings for participants.

The first area we came across was a marshland habitat, and through our binoculars and cameras, we could see a few Common and Green Sandpipers moving amongst the shallow waters, with Little Ringed Plovers to give them company. One of the birders saw a Jacobin Cuckoo too, well-known as the heralder of the Indian south-west monsoon, making the long journey from Africa just a few days before the arrival of the rains here. What many people may not be aware of, is that a population of these birds may actually be residing within the country (during the summer months, largely restricted to the southern states) with the rest heading back to Africa as the summer arrives here. There is still so much more to discover about the migration journeys they take. But to get back, the sightings continued, with three species of herons, the Indian Pond Heron, Striated Heron and a juvenile of the Black-crowned Night Heron, all well-known wetland associates. We saw Green Bee-Eaters perched on the wire cables, and in fact, later on ahead, saw a pair mating, a nice natural history moment (The more modest of you, please shy away from the next image). 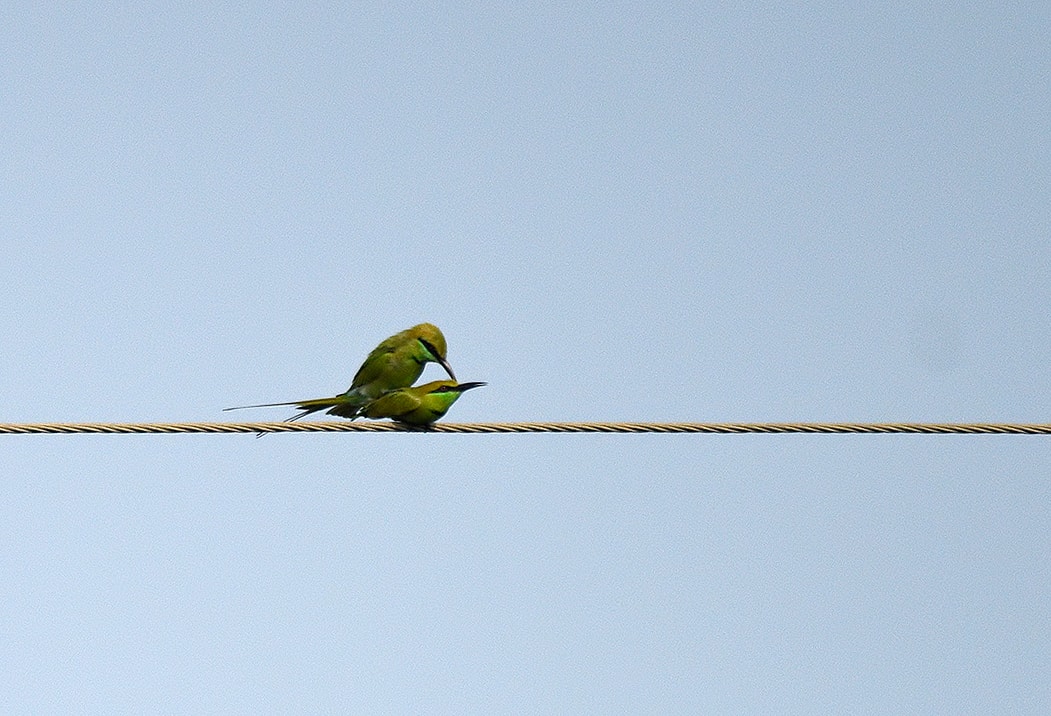 Record shot only, apologies for the quality (they were at a distance and we didn’t want to disturb them by going closer at this time :))

As we moved on ahead, the habitat gradually gave way to a mix of woodland and grassland, and with the change of habitat, the species mix changed a bit too. Participants began to sight larks, among them the Rufous-tailed Lark and the Oriental skylark. Barn swallows became a common sight flying overhead and perched on wires (but almost always against the light!). However there was something unusual going on today, nearly all the birds were giving us birders an unusually wide berth, being seen only for brief glimpses including a very shy Lesser Whitethroat and a Sykes’s warbler, both winter migrants to the region. 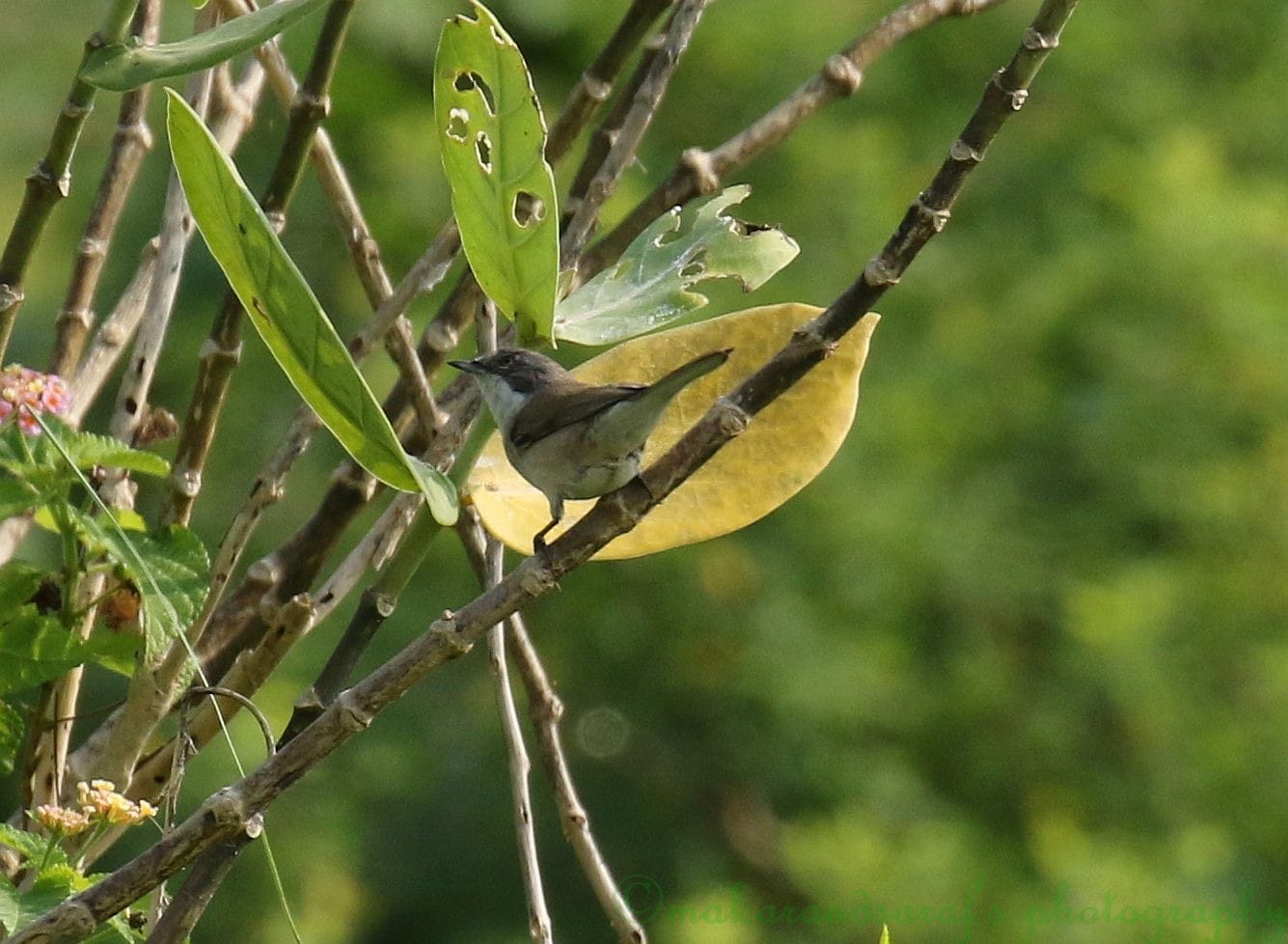 The Lesser Whitethroat belongs to the genus ‘Sylvia’, collectively known as the Typical Warblers belonging to the Old World (Africa, Europe & Asia). Most of these warblers feed on insects and can often be seen in comparatively drier areas with thorn, scrub and grassland as opposed to thick forest. This species is a winter migrant here coming here from further north in Asia, likely from countries such as Uzbekistan, Kyrgyzstan where it breeds. Image credits: Makarand Saraf

A Eurasian Wryneck, a unique bird, the only member of its family and a migrant to the region made the shortest of appearances (You’ll see why it gets its name through this video: https://www.youtube.com/watch?v=LD52NLJw4Pk). Thankfully, a flamboyant Common Hoopoe (the bird the storm Hudhud was named after) and a bold Black-winged Kite decided to change things up, and posed for us birders. And then a group of birders including Mandar and Ronit saw some more bold individuals, this time, Grey-Necked Buntings, another winter migrant visiting from the colder climbs of Northern Asia. 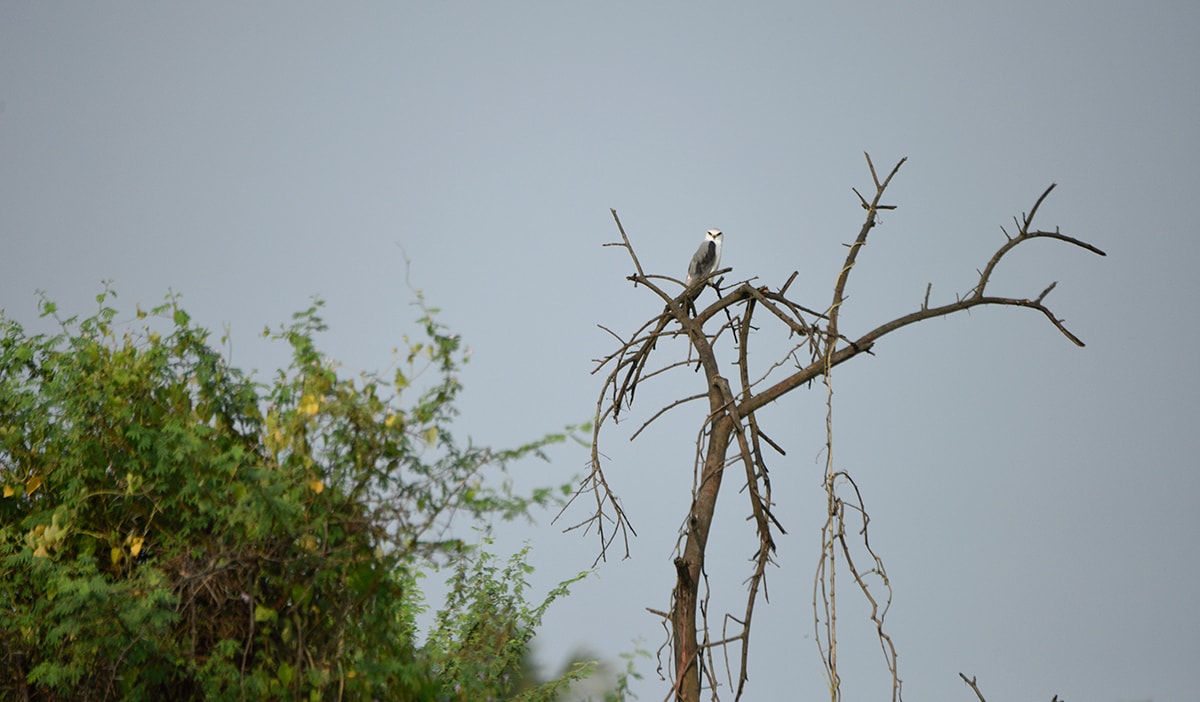 A Black-winged Kite stands sentry. They can often be seen hovering over grasslands in search of prey, a distinctive behavior.

We trudged on, as the heat and humidity started to pick up a bit with the rising sun, a small hamlet on our left, and the shade of a few trees providing some relief, as we sighted Purple and Purple-Rumped Sunbirds and Baya Weavers. Spotted Doves crooned away in the background, Plain and Ashy Prinias made blink-and-miss appearances as we ventured on, and gradually the woodland gave way to the wide expanse of the Bhuigaon beach. 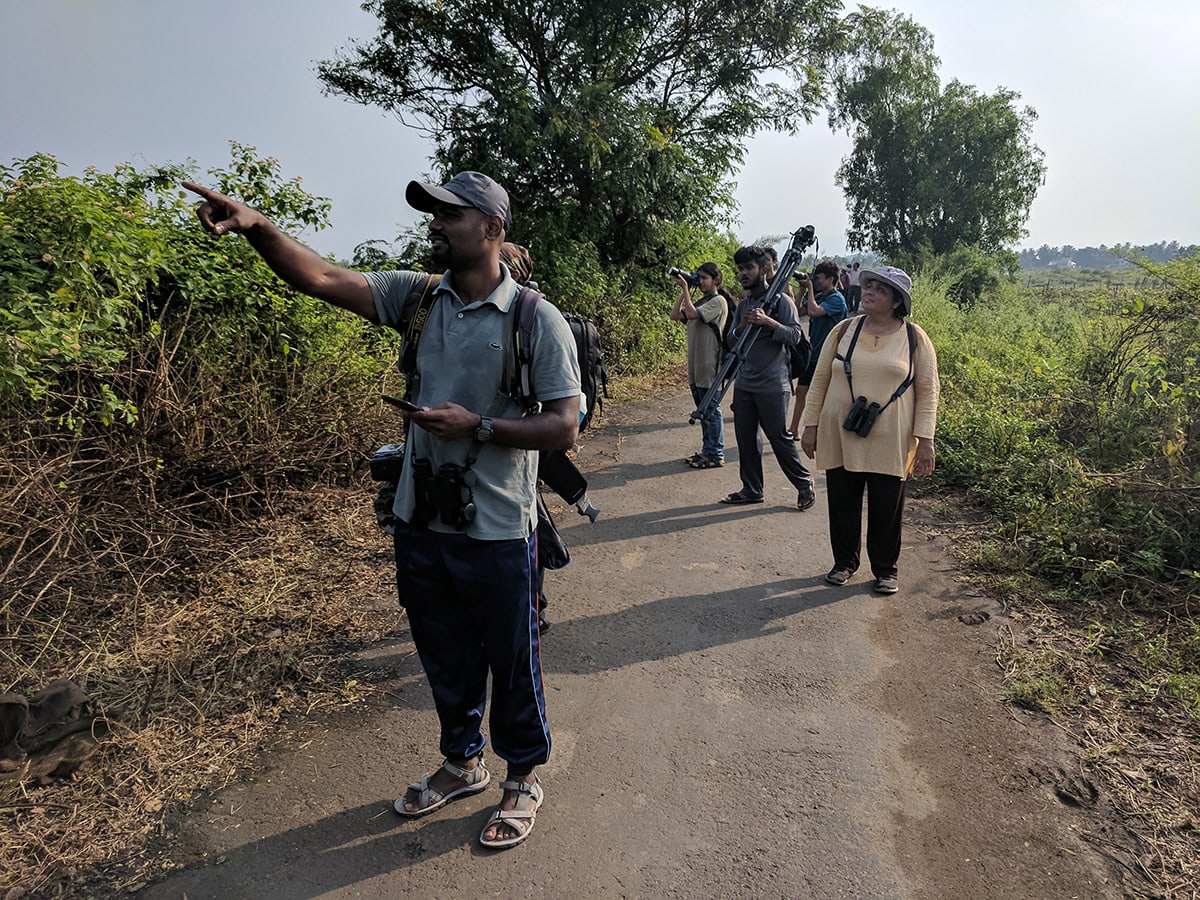 Kuldeep points out some Baya Weavers to the participants

The tide still seemed to be far away, so we could not sight many birds first up. Mandar and his group which were further up ahead had managed to get a glimpse of a soaring Osprey, a magnificent aerial predator adept in hunting a variety of small to medium-sized marine prey, especially fish. We were not so lucky, but did manage to get a glimpse through our binoculars of a rich-chocolate brown Brahminy Kite very far away. Unusually this species is not as abundant on Mumbai’s coastline as you see just when you start heading south of the Mumbai and Greater Mumbai region. Would be very happy to hear opinions on why this is so. 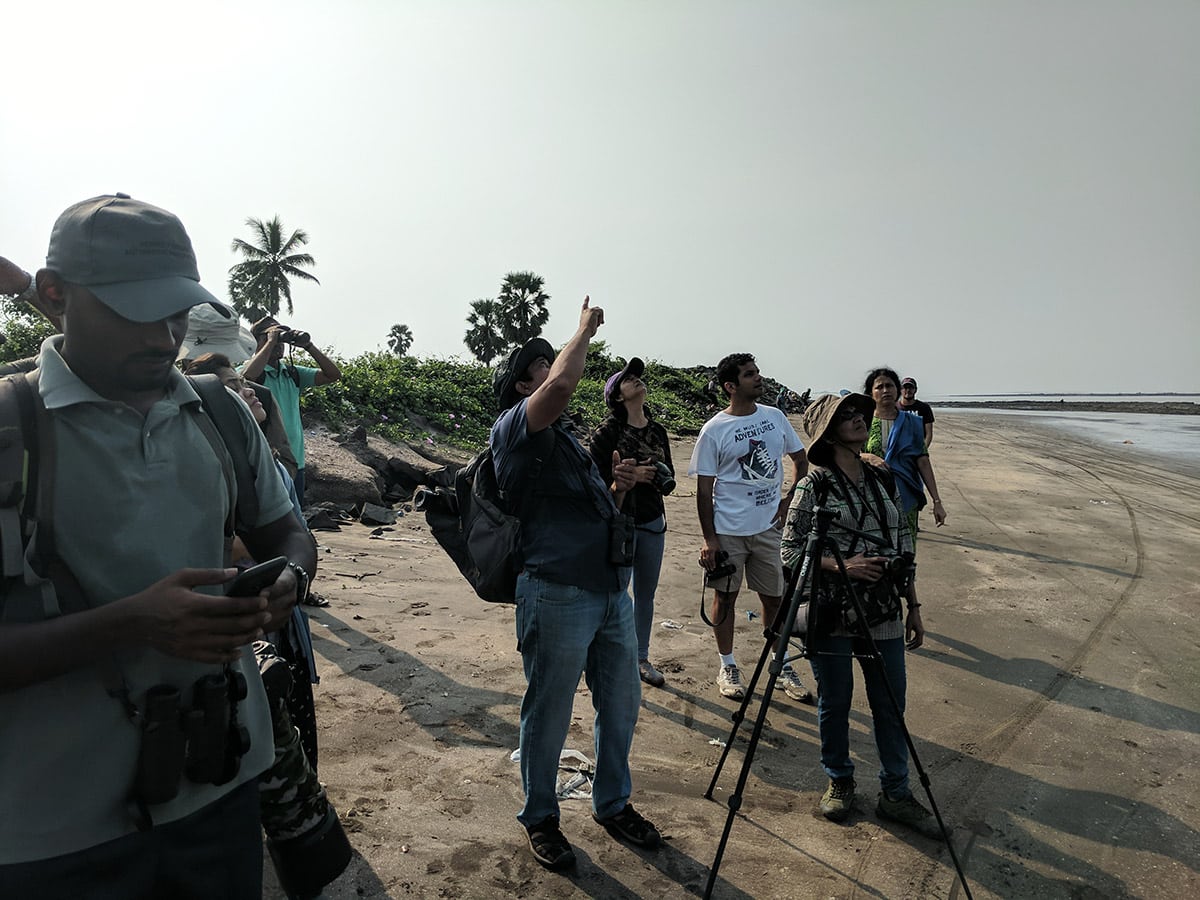 Now we could see a few Sand Martins and Asian palm swifts circling above us, the broad wing shape and pale underparts of the martin and the pencil-like body shape and the thinner, aerodynamic wings of the palm swift helping to differentiate these fast-moving birds. Some distance away just at the edge of our binoculars’ vision, we could spot a few sand plovers (rather difficult to differentiate between Greater and Lesser Sandplovers at the distance). We noticed a slightly larger wader and the distinctive upturned bill shape and its size made it easy to identify as a terek sandpiper. Small densely packed flocks of stints also circled the sea beyond. 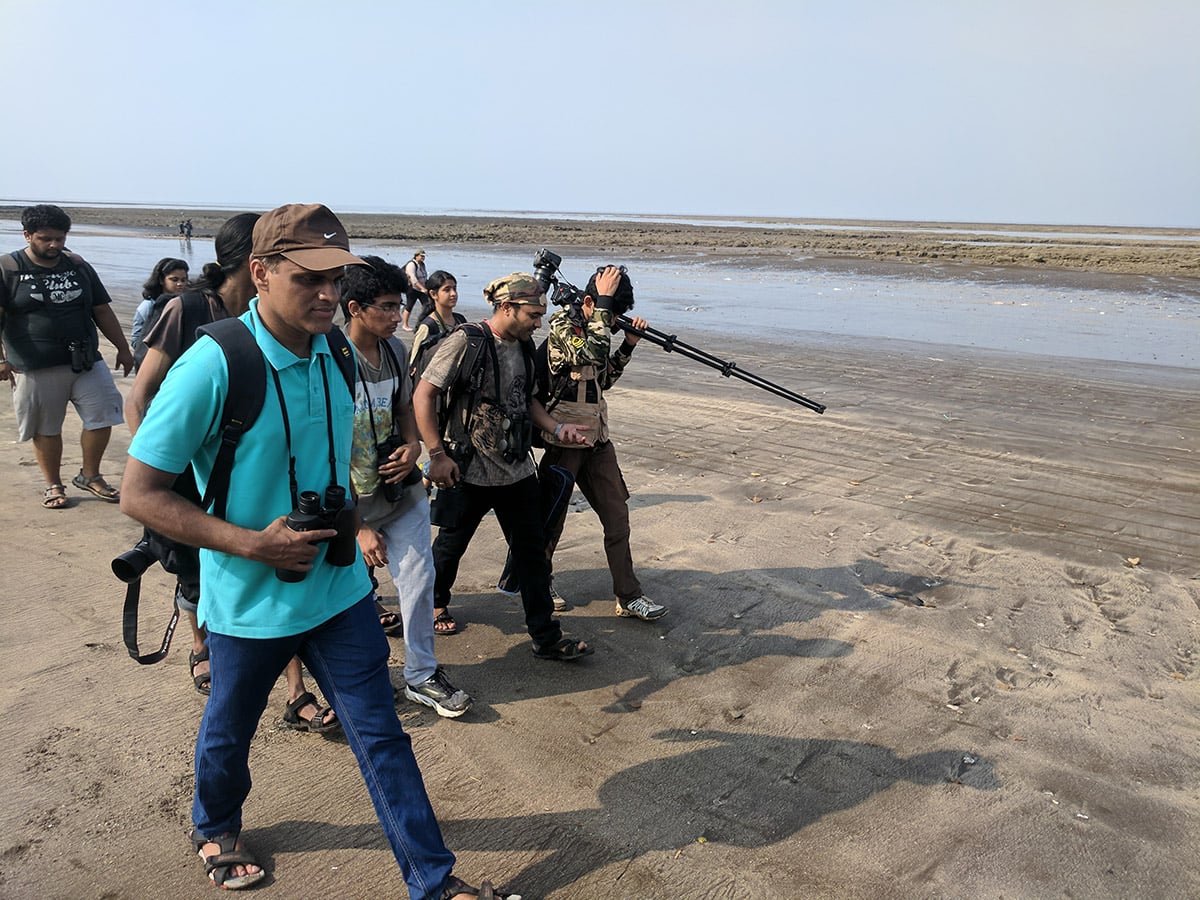 Varun along with enthusiastic participants 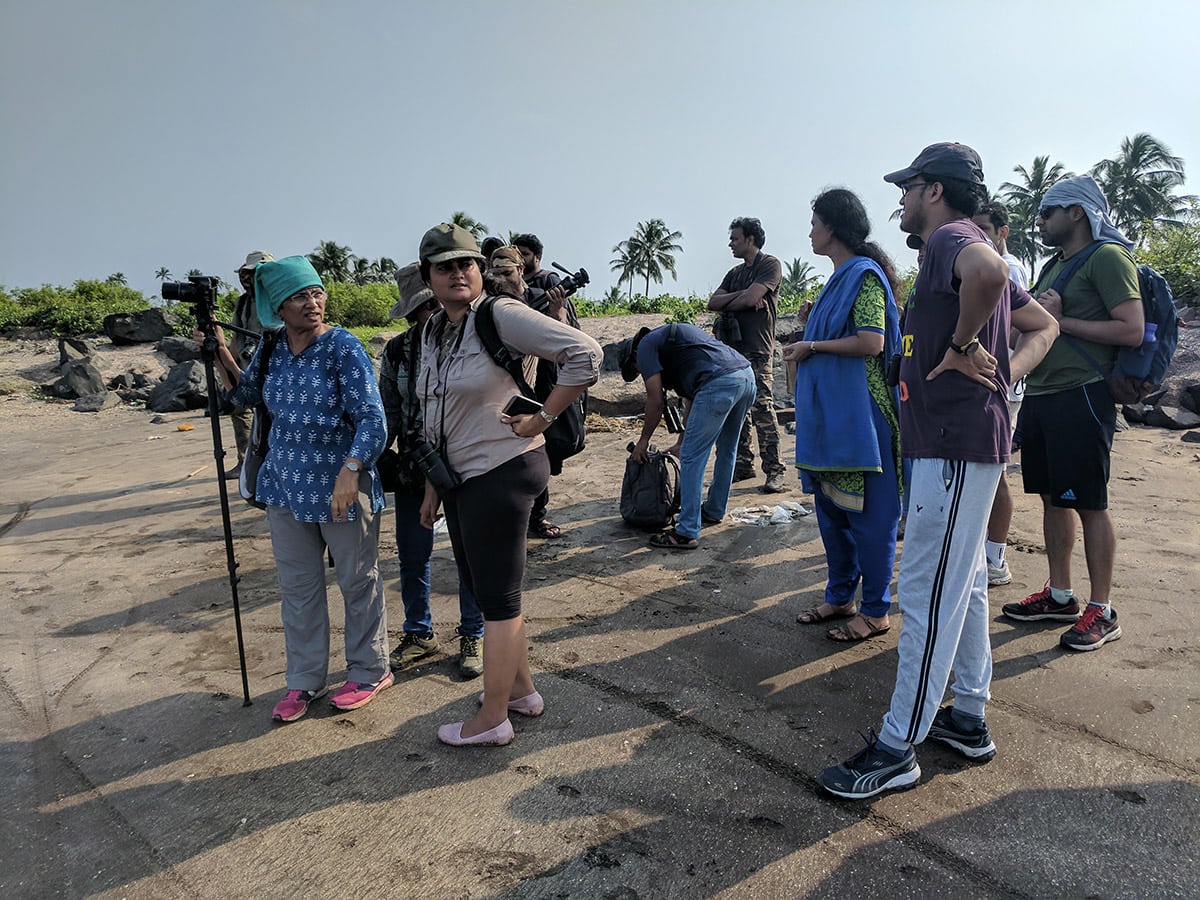 We take a pit stop on the beach

With no comforting shade, it was amazing to see passion trumping the sweltering conditions, as the participants walked on, still asking questions of senior birders and MBC coordinators and keeping a weather eye out for those waders we all wanted to see. Some of the more interprid participants such as Poonam Kakodkar even went a step further documenting some of the marine life. 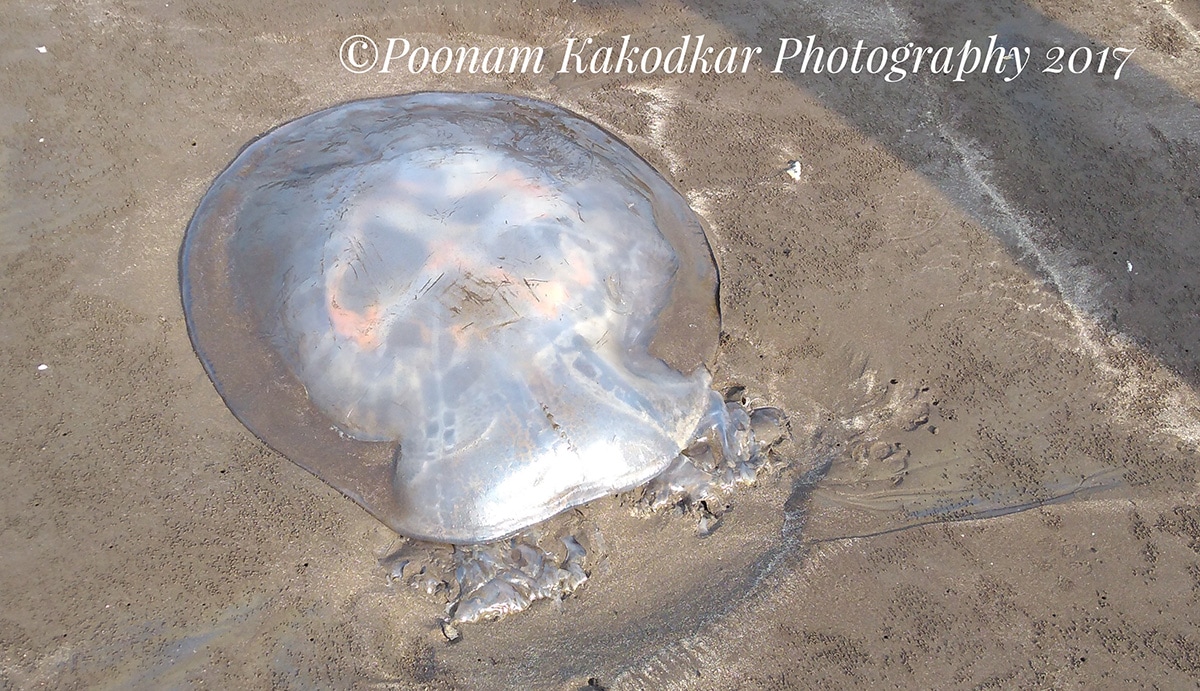 A large jellyfish washed up on the beach. Image Credits: Poonam Kakodkar 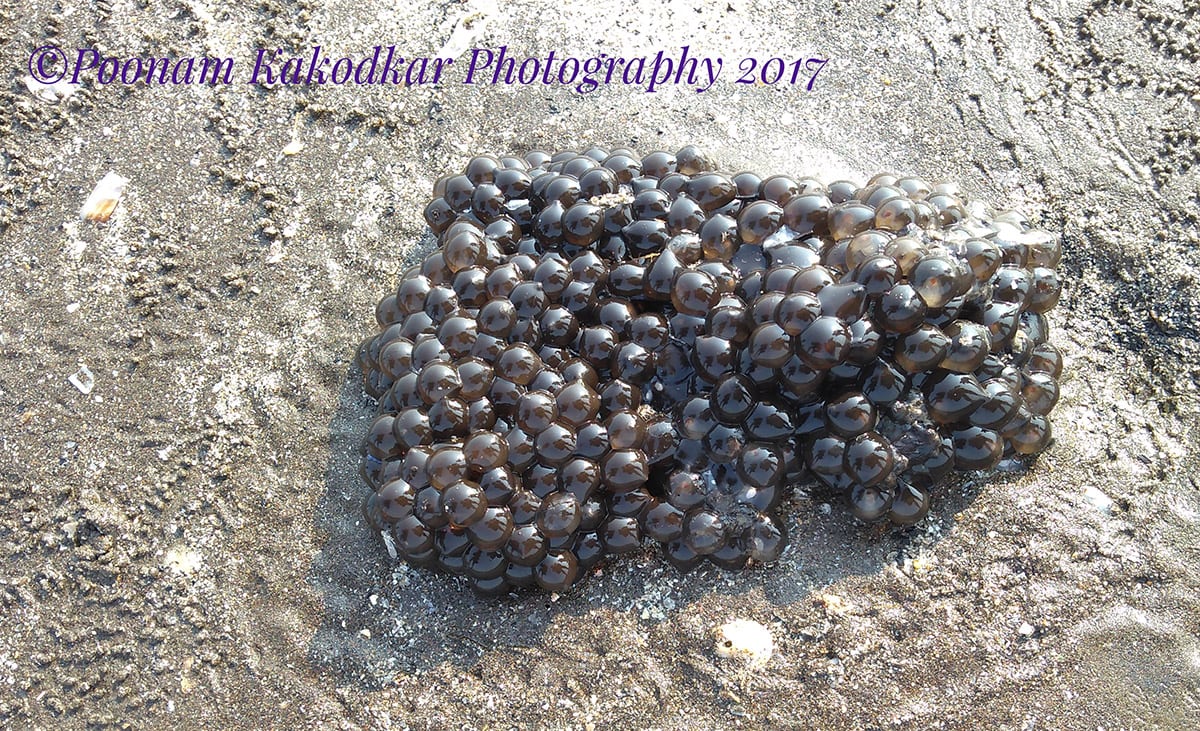 Finally, we reached a part of the beach that was a little less rocky, where the tide had made more progress than elsewhere. This allowed us to finally see a few more details on some of the waders that were so far away earlier. We could see a mix of Greater and Lesser Sand Plovers, Little Stints and a flying Western Reef Egret spotted by Kuldeep. And then we see another bird, a small one the size of most coastal waders, but whiter than all the others. As it so happens, that is exactly the field mark that helps in differentiating this particular wader from the others, those bright white underparts and black legs made it clear we had a Sanderling in our midst. The bird is actually quite common here on Vasai’s relatively undisturbed coasts (though as Kuldeep informed me, the last 10-15 years have seen a fair amount of erosion of the beaches here), but still, it was a nice sighting as this solo individual foraged along the edge of the tide, pecking away at the sand with its short bill, looking for small invertebrates and all the participants had a clear view of the bird even though it was at some distance. 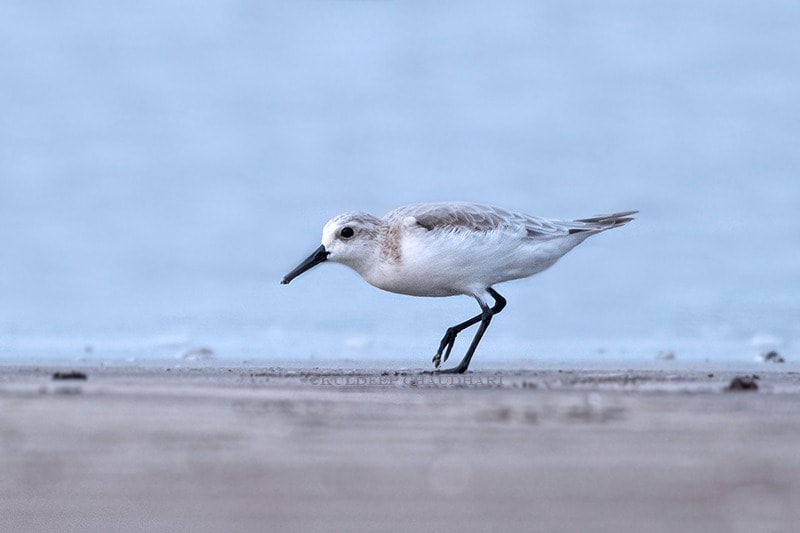 Image of the same species by Kuldeep a day before the walk (Yep, he was there :))

With this sighting, we decided to call it a day and do a quick recap of all the sightings. Imagine our shock when we find out that over 80 species have been recorded during our entire walk! On a supposedly ‘quiet’ day!

But this is exactly what I alluded to earlier, because Bhuigaon provides a mix of habitats that I shared above, the bird diversity naturally here is high. And that is why this was such a satisfying walk, tired and sweaty though we all may be 🙂 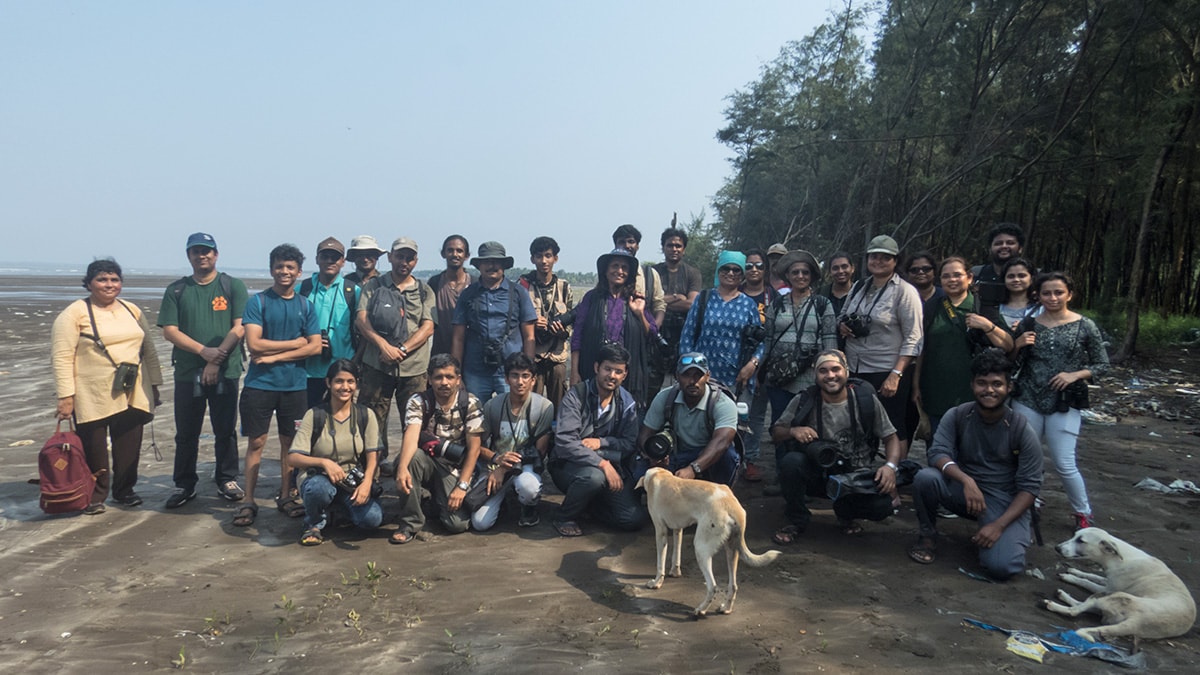 Checklist of the birds seen during the walk: https://ebird.org/ebird/view/checklist/S39613640

You can take the bus from Nallasopara Station (West) towards Bhuigaon village. Buses are available usually every 15 minutes. Ask for the Bhuigaon Church bus stop which is the last stop and from thereon you can ask anyone to direct you towards the way of Bhuigaon beach. Remember to start keeping an eye out once you cross the township, as the road passes through marshlands. From there, the road leads straight to the beach. Try and manage the timing of your visit to approximately 2 hours before the high tide sets in the for most conducive conditions for seeing waders & shorebirds.

Link to the Facebook Group of the Mumbai Birdwatchers’ Club: https://www.facebook.com/groups/mumbaibirdwatchersclub/ 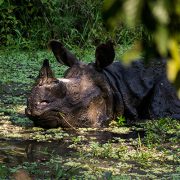 Chitwan - A Treasure of the Terai 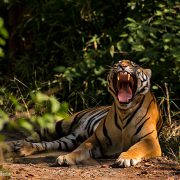 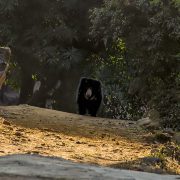 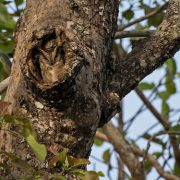 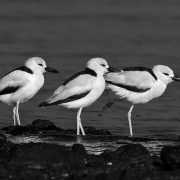 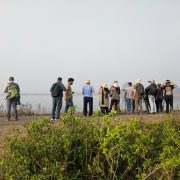 Mumbai Birdwatchers' Club: Uran and the Quest for the Common Shelduck
6 replies

Want to join the discussion?
Feel free to contribute!

Mumbai Birdwatchers’ Club: Uran and the Quest for the Common Shelduck